The Willows Medical Centre is based in Queensbury and has a patient population of approximately 8,600 patients. It is a purpose built site with an attached car park with disabled access. We are a dementia friendly practice. 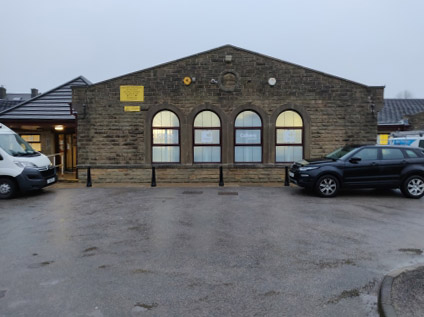 Where to find us

The earliest recorded resident doctor in Queensbury was Dr Fawthorp in 1820. He practiced from ‘The square’, more commonly known at the time as Doctor Moor, which later became Moor Street. In 1885 the same practice premises called ‘the square’ was renamed ‘The Willows’ .

In 1895 Mr Foster (part of the village mill family) arranged for the old practice house on Moor Street to be replaced by a substantial modern residence also called ‘The Willows’ on Queensbury High Street, this later became a vicarage in 1919 and then the Yorkshire Bank in 1983. The name ‘The Willows’ can still be seen carved on the buildings stone lintel.

During 1919 the surgery on the High Street ceased to become ‘The Willows’ when the doctors moved out of the surgery into other private dwellings at Scarlet Heights, Briggs Villas, Sandbeds and West End.

The Health authority in 1974, moved all the GPs in Queensbury into a new purpose built health centre on Russell Road. As the population of Queensbury grew, the surgery on Russell Road could no longer cope with the patient numbers, so some of the GPs moved in 1999 to the current medical practice on Osbourne Drive. The practice was renamed ‘ The Willows’ for 2 reasons, the name was the original Queensbury practice name from 1885, and the new surgery was built on the cricket pitch at Granby fields – Cricket bats are also made traditionally of Willow wood, so the name seemed apt.